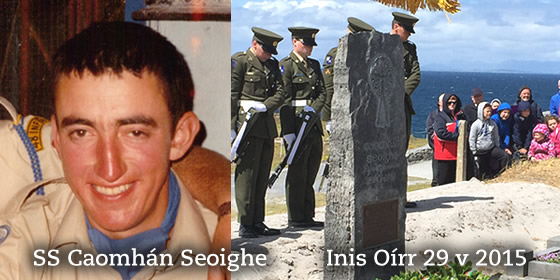 The Minister for Defence Mr Simon Coveney T.D., Lt Gen Conor O’Boyle and Mr Maurice Quinn (Secretary General of the Department of Defence) attended a commemorative ceremony in honour of Saighdiúir Singil Caomhán Seoighe on Inis Oírr on Friday 29 May 2015.

The ceremony was dedicated to the memory of SS Seoighe who has been Missing In Action since an incident in Dynater, South Lebanon on 27 April 1981 where he had been deployed with 48 Inf Bn with the United Nations Interim Force in Lebanon.

The dignatories who were led by Brig Gen Kieran Brennan (GOC 1 Brigade) gathered with members of Caomhán’s family, his home unit An Chéad Chathlán Coisithe and colleagues from 48th Infantry Battalion for Mass in Teampall Chaomhán and the unveiling and blessing of a monument.

The altar in Teampall Chaomháin was dressed for the Mass by Caomhán’s sister Máire in a “Damascus cloth” and with two candlesticks which had been purchased in Lebanon. Photos of Caomhán with colleagues in Lebanon were placed alongside a jug of roses representing his siblings and parents in the window frame of the sunken chapel on the island. 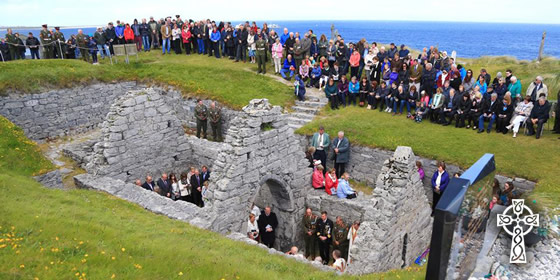 In his homily, Fr Keane described his memories of Caomhán from his birth in 1960 through his primary education in Scoil Chaomháin and then secondary education in Coláiste Éinne.

Caomhán joined the Defence Forces in Renmore in 1979 and deployed to Lebanon with 48 Infantry Battalion. ”Bhí sé de mhishneach aige aghaidh a thabhairt ar an Liobáin agus seasamh ar son na síochána.” Fr Keane described Caomhán’s dreams back in 1981 as threefold: plans to be back home for a friend’s wedding, looking forward to celebrating his 21st birthday at home and to building his own house on the island.  This all changed on 27th April “nuair a tháinig an scéala a chuir an scannra trínár gcroí: Bhí Caomhán ar iarraidh agus a chompánach Hugh Doherty as Leitir Ceannainn ar Shlí na Fírinne”. 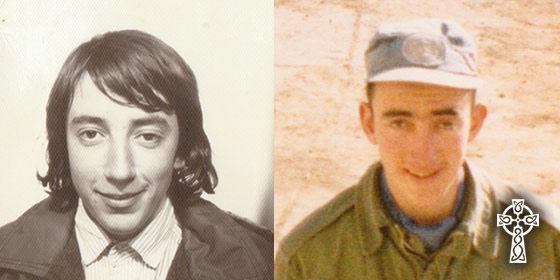 Music for the Mass was provided by the primary and secondary school children of Inis Oírr. Readings and Prayers of the Faithful were read by relations and classmates of Caomhán. 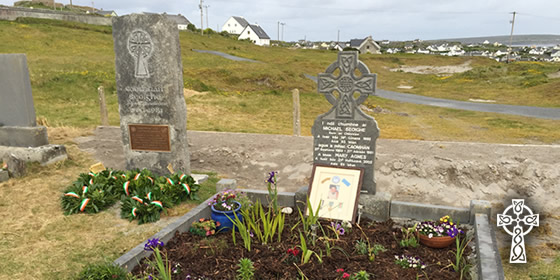 After the Mass, the congregation moved to the monument beside the Seoighe family grave.  An address was given by Minister Coveney after which he and Caomhán’s sister Máire unveiled the stone which stands beside the Seoighe family grave in the cemetery on Inis Oírr. It was sculpted from limestone by the sculptor Alexandra Morosco. The lettering was carved by Tom Little.

The wreath-laying on behalf of the Government, the Defence Forces and the Seoighe family was followed by the sounding of Last Post. The National Flag was raised to full mast. Reveille was sounded and the ceremony concluded with the National Anthem. The parade commander was Lt Col Mary Carroll OC I Cn Cois.

Music on the day was provided by the Band of 1 Brigade conducted by Capt Brian Prendergast and pipes played by Sgt Noel McCarthy. The provision of a commemorative booklet and Mass leaflet prepared by the Defence Forces Printing Press was much appreciated by the large attendance on the day.

The work by staff of 1 Brigade HQ and 1 Cn Cois combined with the clement weather conditions to provide a very dignified, prayerful and supportive ceremony for family, islanders and colleagues of Saighdiúir Singil Caomhán Seoighe.

Prayer of Blessing for the Commemorative Stone: 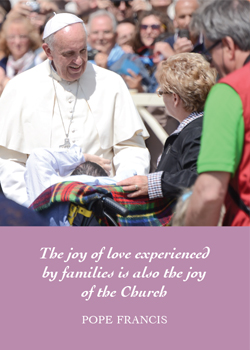