The annual 1916 Commemoration Mass is offered in the Church of the Defence Forces at Arbour Hill on the first or second Wednesday of May. The morning of Commemoration is attended by Uachtarán na hÉireann, members of the Oireachtas, invited guests and relatives of those who took part in the 1916 Rising.

A procession from the Church to the burial plot and memorial garden follows the Mass. During the brief prayer service conducted by the Head Chaplain to the Forces and leaders of various denominations, the plot is sprinkled with holy water. An Taoiseach invites Uachtarán na hÉireann to lay a wreath on behalf of the Irish people. A minute of silence is observed after which the National Colours are raised to full mast and the National Anthem is sounded.

detail of the memorial wall by Michael Biggs completed in 1964

On the prison wall opposite the gravesite is a plaque with the names of other people who gave their lives in 1916. The Memorial Garden is open to visitors every day from 09:00hrs – 16:00hrs. 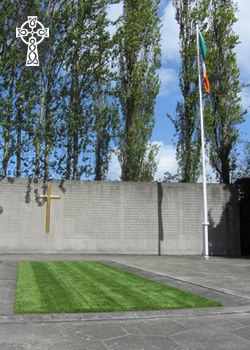