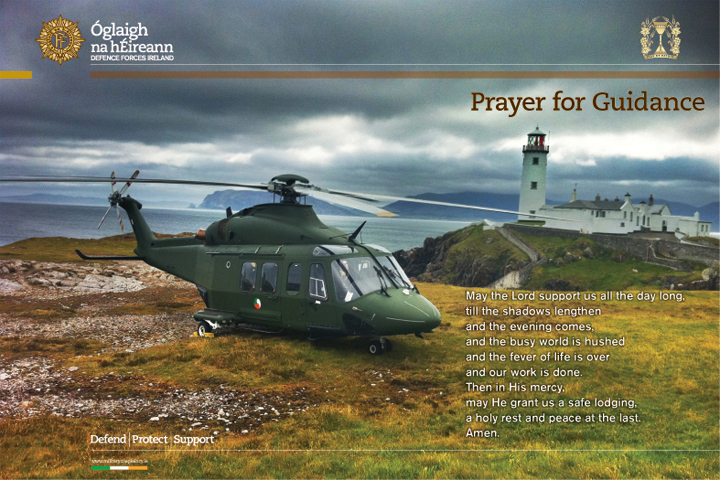 23 October is the Feast of St John of Capistrano* – the patron saint of Military Chaplains. Today is a suitable occasion to thank our Defence Forces colleagues, friends and the extended military community for your prayers and prompts which help us in our work. Please continue to remember us in our work at home and overseas.

Cardinal Newman’s prayer on the poster above might speak to you today. The image captures the pastoral support which chaplains provide to our personnel on at home and overseas, in our territorial waters and in Irish airspace.

* John Capistrano was born in 1386. His education was thorough. His talents and success were great. When he was 26 he was made governor of Perugia in Italy. Imprisoned after a battle against the Malatestas, he resolved to change his way of life completely. At the age of 30 he entered the Franciscan novitiate and was ordained a priest four years later.

His preaching attracted great numbers at a time of religious apathy and confusion. With his 12 Franciscan brethren he was received in the countries of central Europe as angels of God and their work revived a dying faith and devotion.

The Franciscan Order itself was in turmoil over the interpretation and observance of the Rule of St. Francis. Through John’s tireless efforts and his expertise in law, the heretical Fraticelli were suppressed and the “Spirituals” were freed from interference in their stricter observance.