The International Day of Peace was established in 1981 by a resolution of the UN General Assembly and has been observed every 21 September since 1982.

(update)
To mark this year’s Day of Peace, a Service of Prayer was held for all Irish men and women who are serving with the United Nations. It began at 09:40 in the grounds of the UN Veterans Garden at Arbour Hill and concluded at 09:50 with a walk to the 10:00 Sunday Mass in the Church of the Defence Forces.

The IUNVA garden, contains a memorial dedicated to members of the Defence Forces, An Garda Síochána and civilians who have died in service with the United Nations.

Members of the public – including visitors to Dublin for the All Ireland Football Final – are being invited to gather from 09:30hrs for the Prayer Service which begins at 09.40hrs. Prayers will be offered for all Irish citizens who are serving with the UN at present and in particular for those serving on the Golan Heights and Lebanon. Families, friends and colleagues will also be included in the prayers. 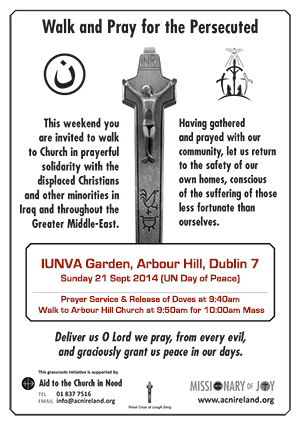 Following the Prayer Service, participants are then being invited to “Walk to Church” for Mass at 10:00hrs in the Church of the Defence Forces, Arbour Hill. This Walk to Church expresses solidarity with Christians and other minorities who have been displaced in recent conflicts.

More details of this initiative are available here

Mass will be celebrated by Most Rev Eamonn Walsh and the homily will be delivered by Msgr Eoin Thynne, Head Chaplain to the Forces.

After Mass, the Cedar Room at Arbour Hill Church will be open for those who wish to spend time reflecting on the work of Irish personnel in Lebanon and to sign the Visitors’ Book.