The key phrase of today’s Gospel “you have treated them the same as us” finds an echo in the ears of people who think their hard work has not been valued by an employer – or children whose “that’s not fair” expresses their annoyance that their parent or teacher has favourites.

Today’s Gospel image of the vineyard might connect with people who have been encouraging their county team at training on wet nights last January or February. They might be sitting or standing in Croke Park knowing that some of the characters in the Árd Comhairle seats only began supporting the team in mid-July….

This Gospel challenges us and comforts us in equal measure – as do all the words and actions of Jesus. We need to be often reminded that God’s thoughts are not our thoughts; God’s ways are not our ways!

The actions of Christ in approaching lepers and his willingness to heal a Roman centurion’s servant were clear ways of putting flesh on the parables of the Prodigal Son or Good Samaritan as he engaged with everyone in the same way whether they were apostles, tax collectors, sinners, lepers or outside the ethnic groups of Galilee.

We see the same generosity and compassion when Jesus speaks with to the repentant thief at Calvary, after the Resurrection when he forgives Peter for his three denials or in assuring a disbelieving Thomas in the Upper Room.

These words of Christian solidarity and prayerful support need to be heard in so many parts of our world today. Another key phrase in today’s Gospel is “why do you stand idle?” We might think of communities in Iraq, Syria and Nigeria where fields stand empty because the Christians and other minorities have been killed or forced to flee from evil, from the Islamic State or Boko Haram.

How many skilled farmers and workers are now standing idly all day long in a refugee camp waiting for food parcels and fresh water. Instead of working their own vineyards, crops, fig-trees, harvesting olives and picking oranges, fruit and mangos, they have no income, no food, no hope for the future. Equally so, teachers, doctors, nursing staff, grandparents have been taken away from their places of work and productivity.

How would we feel if we were treated the same as them? We would certainly echo the “that’s not fair” comment.

The work of Instruments of Peace and this UN Day of Peace which is marked every 21 September is a reminder to support all who work for peace – whether at home in Ireland as Gardaí Síochána, overseas as UN peacekeepers or as diplomats or even in the workplace, in school and between families!

Some of you viewing today have served with the United Nations overseas in Congo, Cyprus, the Golan Heights, Lebanon, Kosovo, Liberia or Tchad. Some of you listening have a son or daughter who is currently serving on the Golan Heights or Lebanon at present.

But our faith in God challenges us to go further and not leave this valuable work only to those in uniform.

Before he prays for “safe lodging, holy rest and peace”, Cardinal John Henry Newman – who was beatified this weekend four years ago by Pope Benedict (who on his election described himself as a simple worker in the vineyard of the Lord) – asks the Lord to support him all the day till the shadows lengthen and the evening comes.

This is certainly the prayer of people who are hungering and thirsting for peace and compassion, especially those who are standing idly in the heat of a refugee camp. Newman’s prayer speaks powerfully to me as I consider that Croke Park could be filled thirty or forty times over by the amount of people who have fled their homes in Iraq and Syria.

Our work will never be done until every grandparent, expectant mother, worker, teacher and family enjoys the resources of our world in homes which are safe and secure. 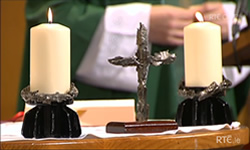 May the Lord support them
all the day long,
till the shadows lengthen,
the evening comes,
the busy world is hushed,
the fever of life is over
and our work is done.
Then in his mercy,
may God grant us a safe lodging,
a holy rest
and peace at the last. Amen.